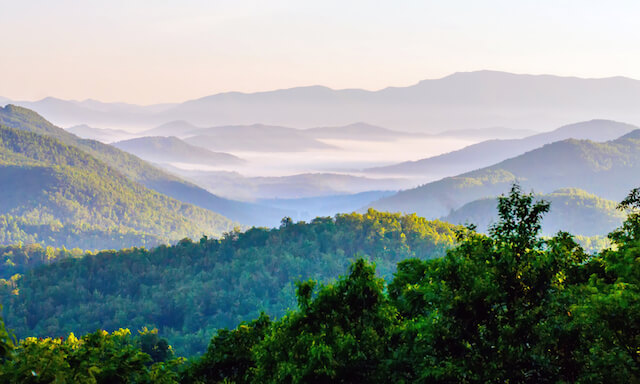 The Appalachian Trail (also referred to as the AT) is a 2,100+ miles of extreme adventure that follows the crest of the Appalachian Mountains, beginning from Springer Mountain in Georgia all the way to Mt. Katahdin located in central Maine.

The total distance of the trail changes slightly year to year because of the rerouting due to maintenance work carried out in various parts. It is protected and maintained by several federal and state owned lands along with public rights of way.

Hiking the entire Appalachian Trail is not only physically demanding but also mentally challenging Endeavour that will push you to the absolute limits.

The trail is rocky for its entire length, having elevation gain and loss that can be compared equal to climbing Mt. Everest back and forth 16 times! In many places, the roads are rocky while in others the road has been built using tree trunks or mud. You will also have to overcome many streams to get to your destination.

What’s the total length of this trail?

The Appalachian Trail covers more than 2,100 miles as it passes through a total of 14 states and includes over 90 miles of changing elevation during the entirety of its course.

The direction mainly depends on the hiker, but there are some factors that have to be considered before beginning. If you’re starting off early spring, it is best that you begin in Georgia as the mountains in the north-east side are snowy at that time.

Most of the thru-hikers like to hike northbound, starting from Georgia any time in the months of late March to middle of April. Southbound hikers tend to begin sometime between late May to the middle of June.

Are there any dangers along the way?

Most of the trail is devoid of any dangerous animals, but do expect to see a few bears along the course of your hike. These bears are known as Appalachian Trail Bears and are native to this region; they are generally shy and end to stay away from human population, except in places where people have been careless with their food.

You may also see snakes occasionally, and most of them are non-venomous variety. The only thing you might have to be concerned about are ticks that are capable of transmitting Lyme disease and various other pathogens.

Hikers can stay in one of the many tent sites that are that our one day away from each other along the trail. It is not uncommon for Appalachian Trail hikers to carry their own tents to relax by the mountainside or a gushing stream.

In areas where there is a large influx of hikers, such as Baxter State Park in Maine and the White Mountains of New Hampshire, the charges for renting a shelter can be greater than in other areas. When in town, the people on the trail also have the option to stay in many hotels and cheap hostels. Food is available at these resting places for those who are not carrying the provisions to make their own food.

How long will the entire journey take?

A thorough hike in the Appalachian Trail can take between 5 to 7 months to complete by an average person. It has been reported that only 20% of hikers who begin the Trail actually end up completing it as others already quit before the end.

Most of the time, the travelers prefer to go from 15 to 20 miles a day depending on their stamina, mental perseverance and how well equipped they are.

Most come equipped with tents, trekking poles, several weeks of food and first aid kits. Veterans and experienced hikers can record an average of 25 to 35 miles per day. It mainly depends from person to person because everyone has different stamina levels and enthusiasm to carry on with their journey.

What are the costs involved?

Most hikers end up spending an average of $1,000 per month. Those who can resist the temptation of spending money staying in motels, eat at restaurants, and various amenities can get away with spending quite less.

A new set of backpacking gear can cost you between $1,000-$2,000 depending on its material and potential utility. Gear that is lightweight is more expensive than heavier gear, so it is advised that you do proper research about the trade-offs before setting off for the hike. In the end, the hike is completely worth it and is an accomplishment worth boasting.